The turn of the 20th century saw America’s transition into the modern era. That came with several cultural shifts, including how the American public saw their coinage. In 1892, the classic Seated Liberty design was replaced with a now-iconic design by Chief Engraver Charles E. Barber. This dime features an intricate Lady Liberty on the obverse and a wreath-encircled “ONE DIME” denomination on the reverse.

Explore L&C Coins’ inventory of brilliant common and rare Barber dimes today to expand your collection with a little piece of history.

Named after its designer Charles E. Barber, this silver dime was introduced in 1892 as a replacement for the Seated Liberty dime. There was an increasing distaste for the Seated Liberty dime in the 1880s largely due to its neoclassicist design, which was no longer popular in America. The US Mint had also become increasingly frustrated by how difficult the design was to strike.

A new dime was commissioned to be made alongside the quarter and half dollar, and a design competition was held for all three coins. When only a handful of entries were received and none were deemed acceptable, Chief Engraver Charles E. Barber was requested to create designs for all three coins.

Barber's dime design featured a right-facing profile of Lady Liberty wearing a cereal wreath on the obverse and the wreath-encircled denomination “ ONE DIME” on the reverse. The dime, quarter, and half dollar were all crafted with 90% silver and 10% copper alloy. A similar design featuring an eagle on the reverse would be made for the Barber quarter and Barber half dollar.

This new silver dime was met with mixed reviews upon its release, with some praising its intricate design and others criticizing it for being too busy. Despite this critical first impression, the first dimes were struck at the Philadelphia, Denver, New Orleans, and San Francisco mints for the first time in 1892. It remained in circulation for nearly 25 years, the minimum amount of time a coin could be produced as per legislation passed by Congress in 1890.

This dime circulated from 1892 to 1916 before it was replaced by the Mercury dime. These iconic dimes are fairly common and affordable to collect, making them popular with new and seasoned collectors alike.

However, the famous exception to this rule is the 1894-S rare Barber dime. Minted in San Francisco, only 24 proof pieces were ever produced. Only nine are known to survive today. While the true reason is unknown, some speculate that these now multi-million dollar coins were created as gifts for the Mint’s superintendent to give prominent bankers. Others theorize that a minor $2.40 discrepancy in budget prompted the Mint to produce just enough dimes to compensate for it.

L&C Coins is a family-owned and operated business founded by coin enthusiast Lee Crane. Since 1974, we’ve offered our loyal customers a diverse selection of authentic and rare coins at a variety of price points to suit collectors of all levels.

In addition to a history-rich collection of both certified and uncertified coins, you’ll enjoy free shipping with every standard order and free express shipping for orders of $25 or more. Should you have any questions, don't hesitate to contact our team of experts — we’re here to help.

What are the rarest Barber dimes?

The rarest dimes are those that were produced in small quantities, have low survival rates, or have unique or unusual features that make them particularly scarce. The rarest ever minted in US history is the 1894-S with a mintage of just 24 coins. Other rarities include the 1895-O, the 1895 Proof, and the 1913-S.

With only 24 in known existence, the 1894-S is one of the rarest and most sought-after collectible coins in the world. One can be worth anywhere from $1 million to $2 million or more, with one selling for $1.9 million in 2007.

What are Barber dimes made out of?

These iconic dimes are composed of 90% silver and 10% copper. The coins were minted using this specific alloy of silver and copper in order to give them the necessary strength and durability for circulation.

What years were Barber dimes minted? 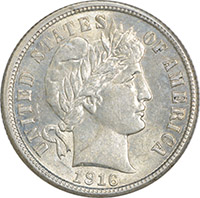