President Franklin D. Roosevelt’s passing devastated the nation. As a tribute to his legacy as both a president and founder of the polio research organization “March of Dimes,” it was decided that he would replace Lady Liberty on the dime.

The first of these new dimes was struck in 1946 and remain in production today. They feature Roosevelt’s profile with a subtle smile on the obverse and a lit torch between olive and oak branches on the reverse. Add this tribute to the president who led America out of the Great Depression and through World War 2 to your collection with our Roosevelt dimes for sale.

The History of the Roosevelt Dime

The Roosevelt silver dime was first struck by the United States Mint in 1946, just one year after President Roosevelt’s death following a decades-long battle with polio. During his struggle, Roosevelt had founded the National Foundation for Infantile Paralysis, a nonprofit dedicated to fundraising for polio research and treatment. This organization was later renamed to “March of Dimes.” With such an obvious connection to the coin, the Mint decided to replace the Mercury dime with a dime honoring Roosevelt’s legacy.

The Roosevelt dime was the fourth circulating denomination of coin to change its obverse design from a depiction of Lady Liberty following the cent in 1909, the quarter in 1932, and the nickel in 1938.

Designs for the new Roosevelt silver dime were done by Chief Engraver John R. Sinnock. He added his initials “JS” on the obverse of the coin, which created a controversy because the public thought the “JS” was a reference to Joseph Stalin. The Mint issued an official notice that these initials were not, in fact, a secret homage to the Soviet leader.

Throughout its production, there have been only a handful of circulated coin design changes. The coin was struck in 90% silver until 1964, after which it was produced with copper-nickel alloy and a copper core from 1965 onward. Also, the dime faced issues with deterioration near its rims throughout its production. To minimize this, Roosevelt’s head was made smaller and the text moved slightly inward in 2000.

This iconic dime remains in circulation today. Since 1992, proof coins have been produced in both silver and clad. They’re sold by the Mint in proof sets for collectors.

Hold History in Your Hand With L&C Coins

Founded in 1974 by Lee Crane, L&C Coins has established itself as a well-known and reputable source for rare, authentic coins for new and seasoned collectors alike. As a family owned and operated business, we’re committed to using our expertise and history to bring you only the very best.

Explore our featured and new arrivals to find the coins you’re looking for. Enjoy free shipping on all standard orders and express shipping on orders of $25. To make your experience with us as easy as possible, we offer interest-free layaway plans of up to five months and a 15-day return privilege if the coin doesn’t meet your expectations.

Questions? Don’t hesitate to contact us for guidance at any point in your shopping experience.

What are key dates for Roosevelt dimes?

Are any dimes valuable?

The most valuable Roosevelt dimes for sale include the 1982 and the 1965, but these are difficult to find. Collectors should watch out for rare but reasonably priced Roosevelts like the 1965 90% silver transitional error, the 1982 no-mint mark dime, and the 1996-W. 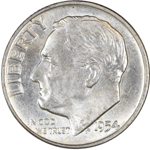