Struck only from 1948 to 1963, Franklin Half Dollars are a very popular collector’s coin. Designed by John R. Sinnock, they feature the profile of Benjamin Franklin on the obverse and the Liberty Bell on the reverse. With 35 unique dates and mint marks in this coin’s series, these half dollars are a popular collecting project for new and seasoned collectors alike.

Explore L&C Coins wide selection of certified authentic Franklin halves for sale today and start or add to your series collection. Each unique Franklin coin allows collectors to own an attractive and sought-after piece of American history.

The Vibrant History of Franklin Half Dollars

This iconic coin debuted in April of 1948 and was minted until 1963, before being replaced by the Kennedy Half Dollar in 1964. Franklin Half Dollars are composed of 90% silver and 10% copper, and were designed by John R. Sinnock. Nellie Taylor Ross (director of the U.S. Mint in 1947) admired Benjamin Franklin and wished to have a coin represent his likeness. John Sinnock was the Mint’s head engraver who began the design, but his successor Gilroy Roberts completed the design following Sinock’s passing. The beautifully detailed half dollar coin features a profile of Benjamin Franklin on the obverse, and the Liberty Bell and American Eagle on the reverse.

The Franklin Half Dollar represented the final shift from portraying allegorical figures on United States circulating coin designs to portraying distinguished Americans. Versions of this iconic coin which feature Full Bell Lines (FBL) are graded as some of the most coveted, representing the best and most full strike with complete details.

L&C Coins is a family owned and operated business focused on bringing both new and seasoned coin collectors a wide variety of authentic, rare, and quality coins at a variety of price points. Founded in 1974 by avid coin collector Lee Crane, L&C Coins has established itself as a well-known and trusted source for coins within the collecting community.

Browse our wide selection of Franklin Halves for sale and other coins today, or explore our featured section for unique rarities. We’re excited to help you enhance your collection. Have questions or need guidance in your coin collecting journey? Reach out to an expert at L&C Coins today — we’re here to help.

What are key dates for Franklin Half Dollars?

The key dates for this half dollar are 1948, 1949-S, 1953, and 1955. 1943 was a record high production of these coins with 22 million struck in total. It’s important to keep in mind that because these half dollar coins have so frequently been melted down for their silver, many dates are rarer than indicated by their mintage figures.

Why are some Franklin Halves called “Bugs Bunny” Halves?

“Bugs Bunny” is a common nickname for some Franklin Half Dollars which feature a die clash across Benjamin Franklin’s mouth. This die clash is caused by a clashing of the obverse and reverse dies and gives Franklin the appearance of having buck teeth. Several thousand of these “Bugs Bunny” coins are known to exist, with most coming from 1955 and 1956.

What metals are Franklin Half Dollars made with?

Produced in 90% silver and 10% copper, these half dollars are crafted with a receded edge and each contain 0.36169 ounces of silver. 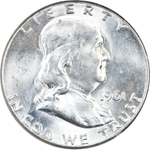