The Standing Liberty is a piece of history frozen in time. Minted from 1916 to 1930 and created to replace the Barber quarter, this beautiful coin was designed by sculptor Hermon Atkins MacNeil and features the iconic obverse image of Liberty standing tall, shield at the ready and olive branch in hand. On the reverse, an eagle is captured in mid-flight.

This quarter was introduced in 1916 as a replacement for the Barber quarter, which had been in circulation since 1892. The decision to replace the Barber quarter was partly due to a misunderstanding of the 25-year law passed by Congress in 1890, which stated that a coin design could not be used for more than 25 years without Congressional approval.

However, Mint Director Robert W. Woolley, who had been in office for less than a month at the time, mistakenly believed that this law required a new design to be produced after 25 years of production, regardless of whether Congressional approval had been granted. As a result, he announced a competition among several artists to design a new quarter. Sculptor Hermon Atkins MacNeil’s design was chosen from over 300 submissions and became the design for the silver Standing Liberty quarter.

This iconic quarter was and is seen as one of the most beautiful designs in US coinage history. The obverse featured Lady Liberty standing in a doorway, draped in a white robe with her right breast uncovered. She held an olive branch and a shield, representing America’s promise to protect peace in the face of any threat, and two dolphins (one representing the Atlantic Ocean and the other representing the Pacific) lay at her feet. The reverse featured a realistic depiction of an American Bald Eagle mid-flight, encircled by a pair of olive branches.

After only a few test coins were minted, Mint Director Wooley stepped down and his successor, Friedrich Johannes Hugo von Engelken, decided to adjust the design without consulting MacNeil. He removed the original dolphins from the obverse and the reverse’s eagle was shifted downwards, with the olive branches replaced by the original colonies’ thirteen stars. These design changes, as well as some striking issues, further delayed production until near the end of 1916.

When production was finally announced in January 1917, MacNeil learned about the design changes and sent von Engelken a letter with his critiques. MacNeil was brought in to the Philadelphia Mint to modify the coin, where he added a chainmail shirt to Lady Liberty to cover her exposed breast and tweaked the eagle to be closer to the center. The Standing Liberty quarter’s final design change took place in 1924, when the dates were modified to be recessed after easily rubbing off and disappearing.

These three design changes are designated as three different types:

These types are also distinguished by how they are graded. The most important indicator of a superior grade for Standing Liberty quarters is the “Full Head” designation, which means the coin has little to no degradation of the head. However, how each type earns that designation is different:

Despite its initial design controversy, the silver Standing Liberty quarter remained in circulation for over a decade and is now a sought-after collectible, with the 1916 and 1917 coins being some of the most valuable dates in the series.

In 1916, the first year of production, only 52,000 proof coins were minted. This was due to ongoing issues sharpening the design. Although these issues weren’t fully resolved, von Engelken rushed production to show Congress that the Barber quarter had, in fact, been replaced after 25 years. In 1917, 12 million bare-breasted coins were produced despite MacNeil's modifications to the design early in the year.

Founded in 1974, L&C Coins is a family-owned and operated business committed to bringing our customers trusted, authentic, and rare coins for their collections. Over nearly 50 years in business, we have established ourselves as a well-known, reputable source in the coin community, offering a wide variety of coins and price points perfect for new and seasoned collectors alike. Explore our featured coins and new arrivals today and discover your own brilliant piece of history. If you have any questions during your shopping experience, don't hesitate to contact the L&C Coins team for assistance. We’re here to help!

What are the most valuable silver Standing Liberty quarters for sale?

What are Standing Liberty quarters made out of?

How many Standing Liberty quarters were minted? 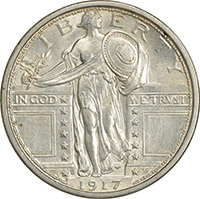