First struck in 1932, the Washington obverse remains on the United States Mint’s present quarter dollar or 25-cent piece. Originally designed to celebrate the 200th anniversary of George Washington’s birth, there is a thrilling selection of rare and valuable dates and unique features to collect. Crafted with silver or cupronickel clad to copper, this iconic coin has featured a variety of designs and commemorative designs.

Explore L&C Coins’ wide variety of copper-nickel and silver Washington quarters for sale to begin or enhance your collection. New and seasoned collectors alike are sure to find a special, history-rich coin to fit their needs.

The History of the Iconic Washington Quarter

First struck in 1932 to commemorate the 200th anniversary of George Washington’s birth, the 90% silver Washington quarter replaced the Standing Liberty Quarter as the United States Mint’s 25-cent piece. The quarter’s original design was created by John Flanagan, a sculptor from New York, whose design was chosen as the contest winner by the US Treasury Department from more than 100 presented entries.

In 1932, quarter production was limited due to the Great Depression, and the Mint did not make any during 1933. Over time, these quarters have been produced by the Denver Mint, the Philadelphia Mint, and the San Francisco Mint.

On the obverse of Flanagan’s design, Washington faces left and is based on a sculpture of Washington by Jean-Antoine Houdon. The reverse depicts an eagle holding arrows and olive branches. It featured the same design through 1974, but the eagle on the coin’s reverse was replaced with a colonial drummer in 1975 and 1976 to commemorate the bicentennial of the Declaration of Independence. Following 1998, the eagle was no longer used on the reverse.

Searching for coins that embody history and change? L&C Coins is home to an ever-changing and wide variety of history-rich collectible coins for both new or seasoned collectors to begin or enhance their unique collection. Founded in 1974 by Lee Crane, an avid coin collector, L&C Coins is a family-owned business that has become a well-known and reputable source for authentic coins you can trust.

Explore our collection of copper-nickel and silver Washington quarters for sale, as well as numerous other coins today. You’ll enjoy free shipping on all standard orders, express shipping on orders over $25, and layaway plans available. Contact our coin experts with any questions — we’re here to help.

Which Washington quarters are valuable?

Quarters minted in 1932 and 1964 are 90% silver, making them highly sought after for their silver value. The early years of the Washington Quarter from 1930-1940 in Mint State condition are sought after and can be very valuable in a high grade. The more modern 1983-P Washington quarter is rare in high uncirculated condition.

What are key dates for Washington quarters?

What are the different Washington quarter obverse design changes? 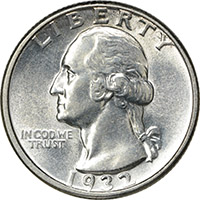